[Is there a double standard in Beijing?] 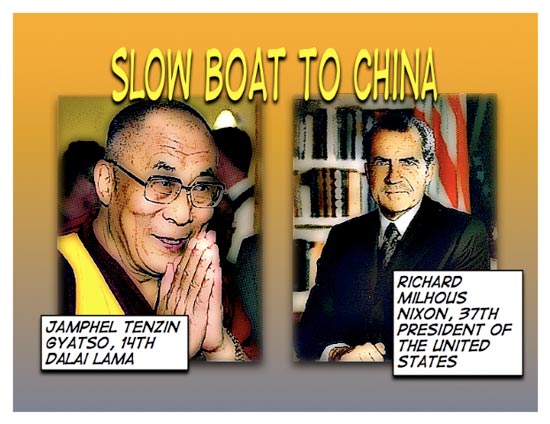 Recently when the Olympic Torch passed through San Francisco, city officials engaged in well-intended skulduggery when they extinguished the original torch and successfully routed a second torch in another part of town. On the announced route, fans, onlookers, and angry demonstrators on both sides of the "Free Tibet" issue had gathered to show their enthusiasm and outrage. It turned out that the rerouting subterfuge prevented violence, but I was struck by the era-defining implications of this event, and other demonstrations which had begin on March 10 in China's Tibet Autonomous Region and soon after had become internationalized. I decided to write something about this in the Coffeeblog, and this is it. The more I learn about Tibet, however, the more complex the issue appears. Read on.

As an old-timer, I remember the days when the People's Republic of China was generally viewed as a international bad guy or villain in most of the American press and the general American consciousness. Then, in 1972, President Nixon visited China and met with Mao Zedong, the legendary Communist leader. Since then, with some notable exceptions, China's reputation has become generally favorable in the USA, as a manufacturing titan and "most favored nation" on a voyage, no matter how slow the boat, to freedom, democracy, and rights for the individual. Now, it appears, with the convergence of the Tibet issue and the Beijing Olympics, once again China's Communist leadership is being seen here as an international malefactor.

Why, when some of the regime's other warts and blemishes (like mass murder and the attempted extinction of individual rights and groups like Falun Gong) tend to generally pass unnoticed in the international press, has the "Free Tibet" campaign gained some traction? Has it reached the point of international humiliation of the folks in the once-Forbidden City before, during, and after the Olympics? A good starting place to answer such questions is Tibetan Buddhism itself, of which the Dalai Lama is the acknowledged spiritual leader outside of China. The Wikipedia asserts:

"In the wake of the Tibetan diaspora, Tibetan Buddhism has gained adherents in the West and throughout the world; there are estimated to be tens of thousands of practitioners in Europe and the Americas. Celebrity Tibetan Buddhism practitioners include [movie actor] Richard Gere, [Beastie Boy] Adam Yauch, [martial artist] Jet Li, [the late beat poet] Allen Ginsberg; [composer] Philip Glass, and [movie actor] Steven Seagal (who has been proclaimed a [reincarnate lama himself])."

And, yes,the near-legendary Italian-American director Martin Scorsese had made a 1997 film called Kundun about the life and exile of the Dalai Lama.

Add to that the events in the Tibet Autonomous Region beginning March 10 of this year, when rumors of beatings and killings of monks by Chinese government authorities reportedly triggered violent retaliation. The Dalai Lama stated, "we remain committed to taking the Middle Way approach and pursuing a process of dialogue in order to find a mutually beneficial solution to the Tibetan issue," after being accused by high China officials of having masterminded the the violent conflict stemming from the high-visibility "Free Tibet" campaign

In my view, another international generation, heirs of the 1960's counterculture, and sympathetic to Buddhist ideals and peaceful solutions to problems, has now reached maturity as a huge critic of the methods used by the Chinese Communist gerontocracy.

But, as the Dalai Lama also said, "The problem of Tibet is very complicated." Yup. It is. Let's roll back the time machine. The recent Tibetan uprising included violent attacks on otherwise innocent members of the ethnic groups moving into the Tibet area in increasing numbers, presumably with the approval and encourangement of Beijing officials. These not only include Han Chinese (members of the majority nationality in China, and known worldwide simply as "Chinese.") Many of the migrants to Tibet include Chinese citizens of a nationality know as Hui.

Hui? Who are Hui? Several sources tell met that Hui are predominantly Chinese-speaking Han Chinese individuals with one important distinction: they are Muslims, descended from Muslim traders, Islamic Mongol and Turkic warriors and settlers, and even from far-eastern Nestorian Christians.

OK. So? Aren't they just Han Chinese like the rest of those moving into geographical Tibet? Well, yes and no. The no part is that their religion, Islam, appears to be not only tolerated, but approved by the Beijing communists, whose Marxist view is reportedly promotion of atheism. This pro-atheist, anti-religious view could be cited as a reason for exiling the Dalai Lama and his "lamaist" followers from Tibet.

Do Chinese communists promote atheism in the same way it was promoted by Stalin in the Soviet Union? A good question. Marx had called religion the opiate of the people. But a multiculturalist perspective might consider a religion to be a colorful folk custom of an ethnic group. Is that the Chinese view, before and after Mao Zedong?

Is there a double standard in Beijing? Do Chinese communists view religion as OK among Hui Muslims, but not among Tibetan Buddhists? Is Han chauvinist piggery a factor? Or are there history-based political reasons for Beijing's perceived, and probably accurately perceived desire to crush Tibetan lamaism and even the Tibetan ethnic group itself.

Supposedly, the Dalai Lamas have been backed by the Mongols, who had taken over the Beijing empire during the Yuan Dynasty, before being ousted by the Han-led Ming Dynasty in 1368, 604 years before Nixon visited China. A Mongol khan, Altan, reportedly bestowed the title of Dalai Lama on the third one in 1578 when the Mings still ruled. Is Beijing still steamed about the Mongol-Dalai Lama alliance? Are the lamas still steamed about the way the Hans treated them and their allies?

Hey, don't ask me. I'm just a guy in a cafe with a laptop and a cappuccino. I doubt that Nixon knew back in 1972. I have a pretty good hunch, however, that the Dalai Lama knows something about this. And, assuming that his karma is as good as it's cracked up to be, perhaps even Steven Seagal knows too.