Jonathan's Coffeeblog: Joe One and My New Geography 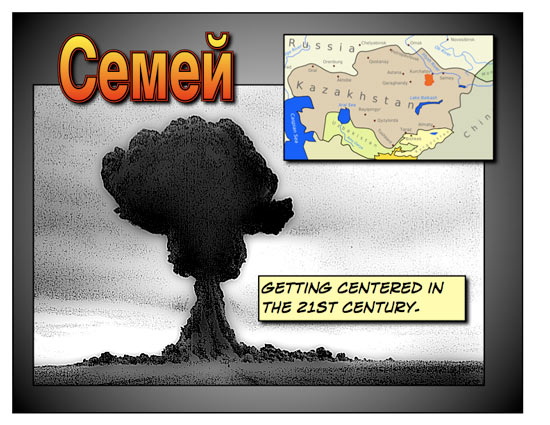 As a kid growing up on the New Jersey-Pennsylvania border in the northeastern USA, I learned geography in school and later by following world events. My idea of the world was that is was centered around the north Atlantic Ocean. I am still following world events, and on the day I wrote this Beijing, China is opening up the Olympic Games, and the nation of Georgia is fighting with a breakaway South Ossetia, into whose territory Russia has just sent tanks. Beijing and Georgia are far from the Atlantic Ocean, as are Tibet, Mongolia, and Iran, places I have written about elsewhere in the Coffeeblog. Over the past year or so I have come to believe that I need to revise my idea of world geography, moving the center away from the Atlantic to somewhere else. Last evening I found where that "somewhere else" is.

I considered that major world events happen on land or near the coasts, and when it comes to conflicts and clashes of empire, most of the big ones have taken place on the vast continent of Eurasia. Huns, Mongols, Han Chinese, Greeks, Romans, Iranians, Turks, Arabs, Spaniards, Russians, Austrians, Germans, French, Dutch, British and Japanese have all made their mark there. Two World Wars started there and ended with a significant American presence. Not to slight the other continents: the Americas, Africa, or Australia, but the inhabitants of these continents (US aside) tend to be reactors, not actors, in the big Eurasian game. Therefore it stands to reason that the center of my new world geography be smack dab in the center of Eurasia. But where is that?

Long ago and far away, Buddhists built a seven-halled monastery on the river Irtysh, in a land where the nomads of the Middle Horde of the Turkic-speaking Kazakhs grazed their herds and erected their yurts. In 1718, the same year that William Penn, founder of Pennsylvania died, Russians built a fort near the ruins of the old monastery, and named the site Semipalatinsk, referring to the seven halls of the monastery. Today there is a city there in the Republic of Kazakhstan, called Semey. But while Semipalatinsk was ruled by the Russian Tsars, and later the Soviet Union, stuff happened there. Very interesting stuff.

The highly influential Russian writer Fyodor Dostoevsky, after doing hard (very hard) time in a Siberian prison camp for attending a utopian socialist discussion group in St. Petersburg, was ordered into the military for five years at the Semipalatinsk garrison. When he returned to St. Petersburg in 1859, a profoundly changed man, Dostoyevsky became the religious back-to-the-land mystic and the compulsive gambler who wrote Crime and Punishment.

A hundred years later, four years after the US nuclear bombing of Hiroshima, the Soviets tested their first nuclear weapon at a site near Semipalatinsk. The American nickname for the Russian bomb was Joe One. At the edge of the test site there is now a lake, called Lake Chagan, the crater of a 1966 underground nuke test. Between Joe One and the Chagan test, numerous tests were conducted, some of which spread fallout on neighboring Kazakh villages, which Lavrentii Beria, the Soviet program director, had not bothered to evacuate. Later, in 1989, an anti-nuclear movement named after the US state of Nevada and the city of Semipalatinsk was established.

Is Semey, the former Semipalatinsk, the geographical center of Eurasia, as some claim? If not, it's close. Within 1500 to 1599 miles lie Lhasa (Tibet), Beijing, Moscow, and Tehran. Within 2999 miles are Mumbai (India), Pyongyang, Istanbul, Jerusalem, Athens, and Mecca. Within an additional 400 miles are Tokyo, Rome, and London. And here in the USA? Anchorage, Alaska is 4242 miles from Semey and New York is 5948 miles away as the crow flies.

Better crows than cruise missiles. But thermonuclear weapons and missiles are all part of 20th Century geopolitics, and in my opinion when considering world geography it is worth remembering Semipalatinsk, Joe One, Dostoyevsky, Lake Chagan, and, yeah, the Huns.