[The HOW of implementing the Marxian revolution.] 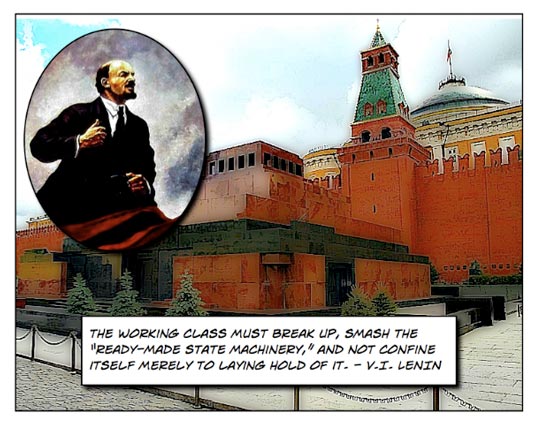 For a long time, I've been wanting to blog about V. I. Lenin, the Soviet revolutionary whose ideas and deeds virtually define what is now known as "left-wing." The problem with blogging about Lenin is keeping it short and to the point. I set myself the goal of finding a maximum of three points I could make about Lenin. I think I've done that, and will make those points, after a little background information:

The son of a schoolmaster born under the name Vladimir Ilyich Ulyanov in 1870, Lenin's ancestry was a mixture of Russian nationalities, including the mongolic Kalmyks, the Finn-like Mordovians, Jews (on his mother's side), and Volga Germans. His birthplace was a former fortress town on the Volga River. His life was permanently altered at age 17 when his eldest brother was hanged by the Tsarist government for involvement in a terrorist bomb plot against the Tsar. After receiving a law degree from the University of St. Petersburg (a city whose name was later changed to Leningrad), Lenin went through imprisonment and many years of exile before returning to Russia and leading the majority (Bolshevik) faction of the Marxist party to victory and becoming head of the Soviet state until his death in 1925. After death Lenin's body was embalmed and presented on view in an elaborate mausoleum, where it still remains.

The mausoleum brings me to my first point, which is Lenin's huge cult of personality. The Russian people of his time, following the Byzantine tradition, were extremely mystical and had a quasi-religious devotion to the Tsars and to the Russian Orthodox religion. During the Soviet era, this devotion was transferred to Lenin, who embodied the Soviet State. Wikipedia states that today there are still long lines at the mausoleum to see Lenin. Two attempts to delegitimize the Lenin cult failed: the first was in 1961, when Soviet Premier Khrushchev gave a speech opposing a personality cult which he blamed on Stalin. Not daring to attack the Lenin cult, Khrushchev framed his speech as anti-Stalin, but pro-Lenin. The second attempt was around 1995, when then-President of the Russian Federation, Boris Yeltsin, had hoped to close the mausoleum. Yeltsin caved to mass pressure, and instead gave a speech from the top of the Lenin mausoleum, the traditional Soviet site where politicians could show their identification with the deceased Lenin.

My second point is the role of Lenin in the history of world Marxism. At the risk of an oversimplification, I would state it this way: Karl Marx defined the WHAT of Marxist Revolution: class struggle, a workers' takeover of the means of production, a temporary socialist state, and a final communist society where a government (state), being no longer necessary, would wither away.

Lenin, in my view, brought to Marxism the HOW of implementing the revolution. Lenin despised "parliamentarism" and did not believe that socialism would ever be voted into power in an electoral or parliamentary process. He believed that power must be seized by any means possible, and that the "ready-made machinery of the bourgeois [middle-class] state [government]" must be, in his word, "smashed." Lenin was also convinced that revolutionaries who had the capability of his plan had to be full-time professional revolutionaries. Such people would later be called "cadres."

And that brings me to the third point: Lenin's belief in the necessity of full-time professional "cadres" whose lives were totally dedicated to revolution. For a model, he is said to have chosen a former Russian revolutionary who died in prison in 1882, whose name was Sergei Nechayev. I will close this blogpost with a quote, not from Lenin, but from Nechayev, who I believe to be an inspiration, not only for Lenin, but for all those revolutionaries of subsequent generations, who are inspired by Lenin:

The Revolutionist is a doomed man. He has no private interests, no affairs, sentiments, ties, property nor even a name of his own. His entire being is devoured by one purpose, one thought, one passion - the revolution.