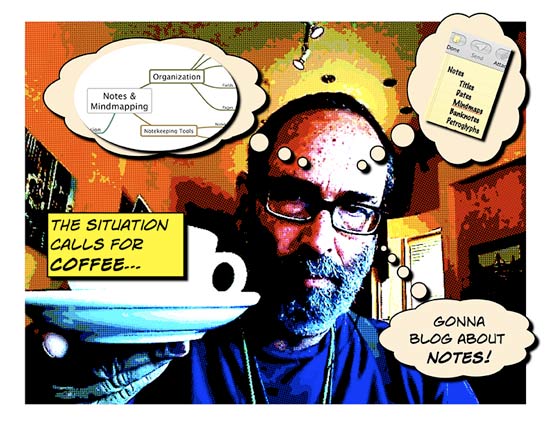 That's me. Since my first computer with floppy drives (a Kaypro II) I've been fascinated with creating, organizing, transmitting, and re-using small scraps of text and perhaps photos or sketches. Back in the Kaypro days there was a fascinating bit of software called KAMAS, which could make text outlines, and later with my first Mac, there was a great program called MindWrite. Now there are many programs for handling notes on computers and smartphones. As time went on I became interested in the existing variety of non-electronic note-making tools (notebooks, scrapbooks, and sketchbooks). At this point I realize that notes, and all of the things one can do with them, are a special interest of mine.

What is a note, and where does that name come from? In my opinion, the earliest known notes were petroglyphs, images and signs marked on a rock, some still remaining from over 10,000 years ago. (Notes marked in mud, sand, skin, or trees are unlikely to have lasted that long, but probably existed.) Petroglyphs were images which served the purpose of text: to convey an idea, just like the comic-art images I create to accompany each Coffeeblog post. Later as written expression developed, text notes became a separate category from images.

The Latin word nota meant a mark, a sign, or a token. A rich vocabulary developed around the Latin idea of notes, and the very fact that we call a note a note indicates that we may be still thinking very much like the Romans of antiquity. Notation, notices, notaries, and notable people all derive from the Roman concept.

The Germanic tribes who lived beyond the boundaries of the Roman Empire probably used words related to the modern verb "merken," to notice. The noun "Marke" still means a mark or a tag in German. Notably (or should I say remarkably) the German unit of currency today is still the Mark, meaning a note on a piece of paper saying that it is worth something. In other words, a banknote.

A good dictionary definition of a note is "a brief record of something written down to assist the memory or for future reference," and that's basically what I mean by a note in this blogpost.

Things can be attached to notes, of which the most basic is a title, suggesting, like a headline, what is contained in the "body" of the note. A title all by itself can serve as a note. Other attachments can include dates: the date the note was begun, changed, or transmitted. On computers, tags are often attached to make it easier to find a specific note among many others.

The most basic form of a note on a computer is an email message, whereas on paper it could be a page or an index card. In another blogpost I would like to review in detail some software which I find interesting for organizing, transmitting, and storing notes.

Recently, there is increasing interest in a visual method of presenting note data, the mindmap, and many new mindmap programs are being developed, including this one which displays the notes I wrote in preparation for this blogpost about notes.