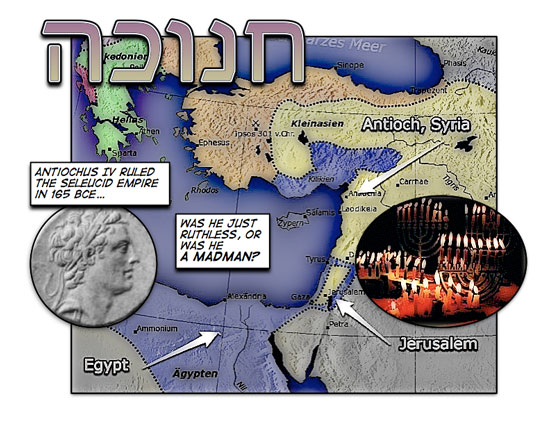 It's Hanukkah again, 5 candles tonight. For Jewish children living in Christian lands, Hanukkah has become a substitute for Christmas. In fact, it is nothing of the sort. The Jewish holiday is celebrated on the 25th day of Kislev, which is a Babylonian name for a month which occurs around the same time as the Roman month of December. The resemblance ends there. The first Hanukkah commemorates an event which took place in Jerusalem 164 years before Jesus was said to have been born nearby in Bethlehem. The event was the rededication of a temple rebuilt on the site of a previous temple built by King Solomon. The word Hanukkah, in fact means "dedication." There is a villain in the story: the king of Syria, Antiochus IV, whose admirers called Epiphanes, meaning "shining" in Greek. The Jews had another Greek name for him, Epimanes, which, translated into the contemporary American vernacular, means "Nut-Job."

The rededication of the Jerusalem temple had become possible because of regime change. The Jews had deposed Antiochus IV the Nut-Job and replaced him with their own Jewish royal dynasty, the Hasmonean Dynasty, which lasted until the Romans put their client king Herod on the throne 102 years later.

Did Antiochus deserve the epithet Nut-Job? The historical record suggests that he was overly fond of stirring up trouble unnecessarily for his subjects and for his kingdom, which he had inherited from one of Alexander the Great's generals by the name of Seleucus. Upon Alexander's death, the generals divided up his empire, and Seleucus got a huge area whose capital was Antioch (named after an earlier king Antiochus), then in Syria.The Seleucid Empire, as it was called, extended to half of today's Turkey, all of today's Iran and Afghanistan, and a chunk of India. Rule was passed down from one king to the next, but Antiochus IV the Nut-Job wanted more than what he inherited, and made war against Ptolemy IV of Egypt, heir to another of Alexander's generals. In between Syria and Egypt, as it is today, was Jerusalem, with its temple, which no longer exists. (Destroyed by the Romans after the time of Jesus, the temple lay in ruins until a Muslim caliph built a mosque on the ruins in the year 687 of the Christian Era.)

Antiochus IV Epimanes at first successfully conquered Egypt, but when he went back for yet even more, the Romans, who at the time had a republic, not yet an empire, decided to draw the line. In that case, the line was literal, a circle drawn in the dirt around Antiochus himself. A no-nonsense Roman diplomat named Gaius Popillius Laenas informed Antiochus that he must make a decision before stepping out of the circle: pull out of Egypt, or consider his kingdom at war with Rome. Antiochus thought about it, then told Popilius that he would cooperate fully with the Roman Senate, and stepped over the line to seal the deal by shaking hands with Popilius.

Antiochus Epimanes did withdraw from Egypt, but on his way back he decided to vent his frustration on the Jews. That, dear readers, is what led to the first Hanukkah. He imposed new taxes on them, and then went on a murderous rampage, torturing Jews (cutting out their tongues, stuff like that) and banning the possession of Jewish scriptures. (Remember, the Jews are called the People of the Book.) In case that there was any doubt that Antiochus was Epimanes, he took over the Jewish temple and rededicated to Zeus, chief god of the Greeks. Finally he had his men sacrifice pigs in the altar of the Jewish Holy of Holies.

Now, if you're looking for trouble, one very easy way of finding it is to invade the most sacred building belonging to a middle-Eastern monotheistic sect of people descended from Abraham, and sacrifice a pig inside it. Trouble is what Antiochus Epimanes was looking for, and trouble was what he got. In this case the trouble arrived in the form of a man named Judah "The Hammer" and his brothers, of the Hasmonean family. They and their Jewish guerilla fighters basically booted Antiochus and his Syrian army out of the Land of Israel, and the rest is history. Except for one thing: the oil.

Now oil in those days was not pumped out of wells in the earth, but manufactured by pressing olives. Though not used for transportation purposes, it was used for lighting, cosmetics, anointment of kings, and of course, food. It was precious. Most importantly, for the purpose of rededication of the temple, the Jews had to obey a Biblical commandment:

And thou shalt command the children of Israel, that they bring thee pure oil olive beaten for the light, to cause the lamp to burn always. (Exodus 27:20-22)

When the Jews cleaned the pork, lard, and other chazzerei out of the temple, they found a small container of oil left over from better times. It appeared to contain enough oil for a day, which meant that the light would go out before they could get enough olives and equipment to press more oil for the lamp. After all, it was called then, and now, the Eternal Light, and was symbolic of the eternal God. Watching the lamp go out would have been horrendously demoralizing to the Jews who has seen their relatives tortured and their books confiscated. And that's when the Miracle happened. No, the Miracle was not merely Jews expelling insane, violent Syrians from their territory. That's not a miracle. That's just business.

The Miracle, attributed by believers to God, was that the oil lasted for a full eight days, before the end of which, more oil was pressed, blessed, and readied for the lamp. And that's why Hanukkah lasts for eight nights and days, with candles burned until eight candles are burning on the eighth night. And, oily food must be consumed. There is no such thing as a low-fat Hanukkah. In Israel they eat jelly donuts, but us Jews from Northern Europe celebrate by frying spoonsful of grated potatoes and onion. Gastronomes might call them "fritters", but we call them latkes. And whenever we eat latkes we think of many things, and one of the things that we think about is this: It could happen again. The oil could run out. Because of the insane behavior of some nut-job.