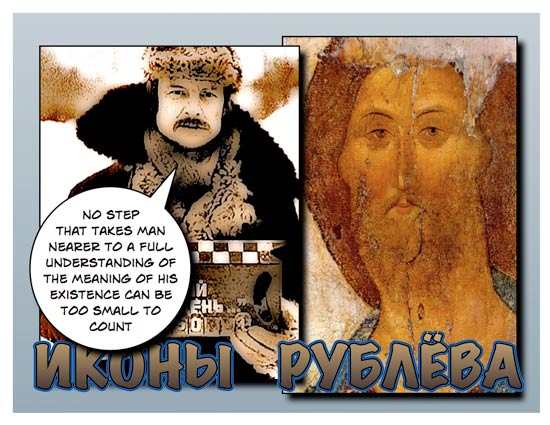 Last night I watched a strange, long, movie called Andrei Rublev. It was in my Netflix queue, and had finally risen to the top after months. I don't even remember why I added it to my queue, but I obviously had the right instincts when I did, because the film got me thinking about many things, not the least of which were Russia, the role of court jesters and holy fools, the meaning of art, and of course, the meaning of life, which is the fundamental theme of Jonathan's Coffeeblog. The film was the work of a Russian director named Andrei Tarkovski, who worked in the Soviet Union and ended his days as a defector. He was buried in a cemetery for Russians in France in 1986.

Tarkovsky reportedly stated that his goal was to make a film diametrically opposed to the standards of Hollywood. It's not that he hated Hollywood films, or rejected them on "capitalist" ideological grounds. In fact, one of his favorite films of all time was The Terminator, starring Arnold Schwarzenegger, which, although he criticized it for "bad acting," Tarkovsky viewed its "vision of the future and the relation between man and its destiny is pushing the frontier of cinema as an art." He viewed the huge expense of making a film as the major obstacle to creating a work of art, because films had to sell enough tickets to pay for themselves as well as making a profit.

Tarkovsky's theory of the meaning of life, as I understand it from commentaries on the Netflix disk and some Internet research, was that each individual must experience it for himself in his own way, since the advice of the older and wiser is ineffectual. Art, then, he said, is a way of providing that experience. Tarkovsky provided it with long, loving, visually evocative scenes which only occasionally moved the plot forward. The scenes are very memorable; they are the cinematic equivalent of the show tune which leaves the listener humming as he walks out of the theater.

Such a scene is the prologue to Andrei Rublev. Raggedy medieval Russians launch a hot air balloon crudely sewn together from rags. A man clings to a tangle of ropes as he is blown over endless vistas of water-filled marshy lagoons, some packed with crude boats. As the balloon crash-lands, a horse rolls on a grassy land spit. One never learns if the man lives or dies, but the camera clings to the grounded balloon in its last breaths. The scene has nothing to do with the title character, Andrei Rublev, who, it turns out, was an icon painter in medieval Russia, but much to do with the landscapes and vast reaches of that land.

The film has been described as cinematic poetry or sculpture, and for some that would sound boring. Tarkovsky films, once one gets used to the deliberate pace, are not boring, even by Hollywood standards. There is a scene of a Mongol-Tatar army destroying a medieval city named Vladimir, log by log, arrow by arrow, and rape by rape. Some parts of it are more graphic than anything that Hollywood self-censorship would permit, even by Quentin Tarantino's generous limits. There are characters in the film more evil than any Western has ever portrayed, and, unlike in Westerns, they do not get their comeuppance. Life is full of evil, with some good, and Tarkovsky shows it that way.

Tarkovsky has two mysterious characters in the film who, after some poking around Wikipedia, turn out to be part of Russian tradition, but not that of the USA. A silly but appealing young blonde woman, appearing mentally retarded and deranged to us Americans, turns out to be one of the yurodivy, or Fools for Christ, protected from harm by the rules of the Orthodox Church. Another is the skomorokh or jester, a street entertainer who was also an outrageous critic of authority, and often ran afoul of the church or state. In my view (am I alone about this?) Tarkovsky himself played both roles on the world stage, including flouting the Soviet Union, which delayed the release of his films, and of course Hollywood. Making movies about Christian themes in a way which even Hollywood would now generally avoid, to be viewed by a Soviet Russia with a long Christian history but an unremitting official policy of atheism, would certainly qualify Tarkovsky for a "fool for Christ" designation. But beware: Tarkovsky was not a propagandist for Orthodoxy or Christianity; he was as critical of the Church as any skoromokh could have been. His one true faith, it appears, was art.