[Chinook jargon has something to tell us] 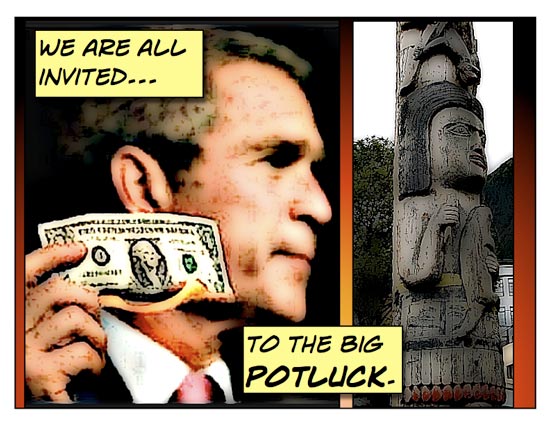 The past few days I've been distracted by major political/economic events, which have caused me great concern, worry, and frustration. As I write this the US Congress is supposedly closing a deal where hundreds of billions of dollars of bad debt will be purchased at a discount, purportedly by zhlubs like me, the American taxpayer. My mind boggles. I am no economist, but I am caught between the threat (the collapse of the world economy!) articulated by our Hyas Muckamuck, US President George W. Bush, and the knowledge, reinforced by plain common sense, that the same muckamucks who got us into the mess are now promising to get us out. Fortunately, I have found another way of understanding this whole mess. You see, I have just returned from a vacation in Alaska.

You have already noticed that I am throwing around words like "muckamuck." In between searches for "bailout" on Twitter, I have been catching up on my knowledge of the Great Northwest, from the Oregon border, through Washington and British Columbia, to the land where Governor Sarah Palin rules as the Hyas Klootchman Muckamuck (Great Woman Boss). I have learned since my return that the Great Northwest has its own language, actually a lingua franca or pidgin, derived from the language of the Chinook Indians, the French, the English, and other Native nations. It is called "chinook wawa" or Chinook Jargon. Words from Chinook Jargon have already been incorporated into standard American English, including muckamuck, which the Wikipedia authors tell me actually does not literally mean chief but a banquet, a feast, a feed, or, as I translate it into editorial page discourse, the public trough or the gravy train. The meaning of chief or boss is derivative. Hyas, by the way, is reportedly pronounced "high-ass," and means more or less just that.

And that brings me back to the Act of Congress which is about to be performed on the American body politic. That act is best interpreted, not in terms of political economy, but in a way better understood within the culture of the northwest indigenous peoples (called First Nations in Canada, and Native Americans or just plain "Indians" in Washington, Oregon, and Alaska). Governor Palin has taught those of us who live in the lower 48 of these United States that if we ignore the customs of the Great Northwest, no matter how archaic they might appear to us urbane hipsters, we do so at our own peril.

We all know of the huge cedar totem poles which the coastal Native nations erect by their lodgings, declaring the geneological lineage of the inhabitants. Some of us may have also heard of the great public feasts of yesteryear, where the more powerful families gave away impressive gifts, some of which caused boggling of the minds of the recipients. Such a feast was called a potlatch, from a word for a gift or a potluck dinner. There are dark stories that some of the potlatching First Nation muckamucks would sometimes burn rare and expensive blankets, food, and other valuable items to show might, power, and lack of concern for mere economics, sort of like lighting a cigar with a hundred-dollar bill.

There is another word in Chinook Jargon, skookum, meaning big, powerful, or awesome. And the potlatch being planned today, not by Native Americans, who will probably not even get a box lunch out of it, but by US politicians and their international high-finance buddies is, well, hyas skookum. I have no doubt that if there are any cigars to be smoked when the bill is signed, that its creators will easily be able to afford to light those cigars with hundred-dollar bills. After all, the giveaway is worth seven billion hundred-dollar bills. Let's hope the world economy is saved this time around. But if not, it will have been one hell of a potlatch.