[Verbal Mud to be Slung] 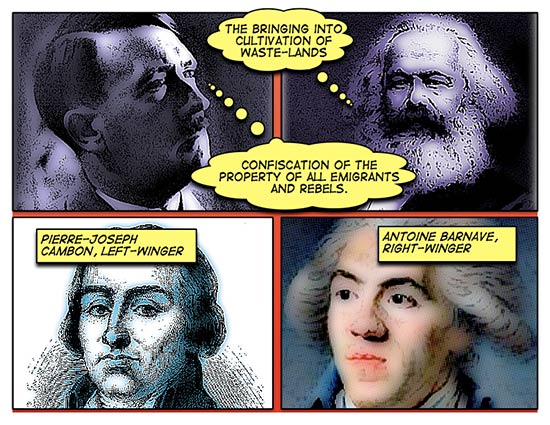 Inveterate Coffeeblog readers will recall that I once dismissed the bogus idea of a meme, analogous to a gene. But then I endorsed using the word as a portmanteau (contraction) of "mindless" plus "theme." It is in the sense of a mindless theme, then, that I am hereby targeting the custom of dividing the political world into the Left and the Right, a bad habit which appears to have begin with the French Legislative Assembly of 1791. By now the habit has become so thoroughly ingrained that we accept it unthinkingly and assume that we are being given useful information. University professors write about "right-wing" politics in Ancient Greece, and it is taken for granted that we know what is left-wing (empathy for the poor, multiculturalism, withdrawal of Western troops from Iraq, preservation of wetlands) and right-wing (criminal penalties for abortion, sexual abstinence, projection of American power, and low taxes.)

Wikipedia declares that the right wing of the 1791 legislative assembly consisted mainly of a group called the Feuillants, who wanted a constitutional monarchy, the kind of political institution that still operates in the United Kingdom, the Netherlands, Sweden, and Jordan. The left wing, the Jacobins, also called the Girondists, like the US Founding Fathers, and today's Republican Party, wanted a republic, no monarchy. A leader of the Feuillants, Barnave, was guillotined in 1793 for being a little too, er, right-wing, that is, soft on monarchy. A left-wing leader, Cambon, almost suffered the same fate for advocating separation of Church and State, (the notorious Robespierre was against it) and had to hide out in Montpellier during the Thermidorian Reaction, a revolt by some of the left-wingers against the left wing for being a little too, uh, left-wing.

The fact is, attempts at making a distinction between right-wing and left-wing politics usually end up causing huge confusion because the terms have tended to be vague, contradictory, and often just meaningless. They function best as epithets, insults, verbal mud to be slung at fools, and that is one of the reasons that right-left meme remains so popular. The main reason, however, in my view, is that politicians in general actually find confusion to their advantage, while clarity puts them in peril. Lest you think that I am alone in considering the right-left distiction mindless, and meaningless, read this talk page in the Wikipedia to see that I have plenty of company.

But, come on! Aren't I being too picky? I mean, isn't it obvious who's a leftist and who's a rightist?

Well, it so happens that there is a ten-point plan in the Manifesto, so let's see what Marx, Engels, and their Party wanted in 1848. Let's start with

Item 2: A heavy progressive or graduated income tax. Item 10a: Free education for all children in public schools. Item 10b: Abolition of children's factory labour in its present (1848) form.

So far, you could say it sounds sort of left-wing. But not really. Probably most red-state Republicans would say that they advocate these planks of the Manifesto.

Then is starts to get weird:

Item 3: Abolition of all right of inheritance.

No, that doesn't sound like Barry Goldwater. But, wait! There's more:

Item 10c: Combination of education with industrial production. Item 1: Abolition of property in land and application of all rents of land to public purposes.

Uh, yeah. Whaddya think? Is that left-wing, right-wing, or just over the top?.

Item 5: Centralization of credit in the hands of the State, by means of a national bank with State capital and an exclusive monopoly.

Hmmm... All credit? In the hands of the State? A monopoly?

Item 8: Equal liability of all to labour. Establishment of industrial armies, especially for agriculture. Item 9: Combination of agriculture with manufacturing industries; gradual abolition of the distinction between town and country, by a more equable distribution of the population over the country.

Distribution of the population? Industrial armies for agriculture? Opposed only by right-wingers?

Item 7. Extension of factories and instruments of production owned by the State; the bringing into cultivation of waste-lands, and the improvement of the soil generally in accordance with a common plan.

Cultivation of waste-lands? Wetlands? Yosemite Valley? But hey, it was 1848.

Item 4: Confiscation of the property of all emigrants and rebels.

Now that sounds dowright Hitleresque. Are we still talking left-wing here? And finally, this little beauty:

Item 6: Centralization of the means of communication and transport in the hands of the State.

Now how many "left-wing" bloggers would support that idea?

Get the picture? If the Communist Manifesto can't be used as a reliable guide to the difference between the left and the right, then what can? I say, not much. Less than you think. It's better to take the ideas one at a time. But, yeah, I love to sling mud as much the next guy.