Jonathan's Coffeeblog: To the Shores of Tripoli 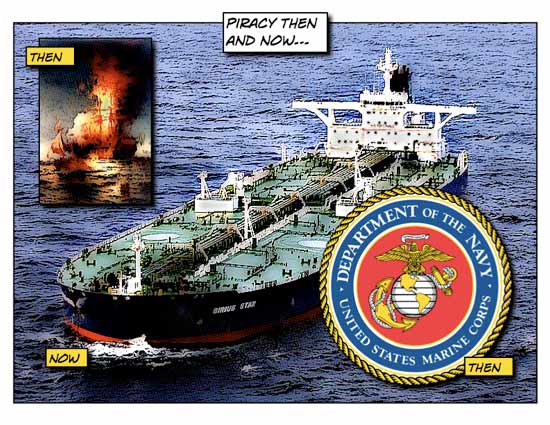 And so my multipart series on the songs of war continues. For the latest episode I had in mind a song related to the American Revolution, but events on the news during this past week influenced me to choose another song, the official hymn of the United States Marines, which is also the oldest official song of the United States military. The event that inspired this blogpost? The hijacking of a Saudi Arabian oil tanker with a petroleum cargo reportedly worth $100 million. Did the United States Marines intervene and rescue the crew and salvage the cargo? Well, no. Not this time (as of the date that I am writing this.) What, then is the connection? The connection is the second line of the first stanza of the Marines' hymn, "to the shores of Tripoli." [YouTube video] That second line refers to an important historical event known as the First Barbary War (1801-1805), important not only in US history but to the maritime history of the Mediterranean and the Atlantic Ocean, to European and American relations with sovereign Islamic states, and to international policy on piracy on the high seas.

From the halls of Montezuma,
To the shores of Tripoli;
We fight our country's battles
In the air, on land, and sea;
First to fight for right and freedom
And to keep our honor clean;
We are proud to claim the title
Of United States Marine.

During the past week the Saudi tanker the Sirius Star was seized by Somali pirates off the coast of Kenya. A spokesman for the U.S. Navy's 5th Fleet said the pirates hijacked the very large crude carrier MV Sirius Star, owned by Saudi-Aramco, at about 10:00 a.m. on Saturday, November 15, while it was southbound, about 450 nautical miles (520 mi/830 km) southeast of the coast of Kenya. British foreign secretary David Miliband reportedly ruled out Britain paying any form of ransom, saying "There is a strong view of the British Government, and actually the international community, that payments for hostage-taking are only an encouragement to further hostage-taking." The final outcome of the act of piracy has not been determined as I write this.

Journalist Archie Bland, in a UK paper on 19 November 2008, identified many factors leading to a huge escalation of piracy events: customary payment of ransom by shipping companies because it's been cheaper than paying and arming large ship crews, a collapse of law and order in Somalia, an escalation of ambition of Somali fishing vessel crews armed for self-protection, improved pirate technology (scaling the high sides of ships like the Saudi tanker), and the deployment of mother ships on the high seas from which small pirate vessels can be launched.

Now back to the First Barbary War, which led to the post-Revolution reestablishment of the United States Navy and Marine Corps. During that war, piracy took place off the Barbary Coast, the northern coast of North Africa, far from the Somali-Kenya coast where the Sirius Star, and other events, have taken place. What both events share in common is that a policy of payment of ransom had been instituted as a cost-saving factor, and that the states from which the piracy took place were weakly ruled Islamic breakaway states. During the First Barbary War, the pirates reportedly came from three Regencies of Algiers, Tunis, and Tripoli, which were quasi-independent entities nominally belonging to the Ottoman Empire, and from the Sultanate of Morocco. The first Barbary war took place between 1783, when the American Revolutionary War for independence from Britain had ended, and 1812, when the second big American war took place, again with Great Britain. During that period a vigorous political debate took place in the new nation (as it still continues now), between factions who favored avoiding a large, expensive, possibly dangerous military by paying ransoms, tributes, and payoffs to hostile entities, versus factions who favored the opposite. The latter faction was represented in the press by a journalist who wrote, "millions for defense but not one cent for tribute," after three officials of the French Revolution reportedly demanded a payment of $250,000 from the US Government merely for the opportunity for an official meeting.

In May 1801, the Pasha of Tripoli declared war on the United States, not through any formal written documents but by cutting down the flagstaff in front of the U.S. Consulate, after the US refused to pay tribute. In response, President Thomas Jefferson reportedly sent frigates to the area after Congress authorized him to instruct the commanders of armed vessels of the United States to seize all vessels and goods of the Pasha. Events escalated, and In October 1803, Tripoli's fleet was able to capture the USS Philadelphia intact after the frigate ran aground while patrolling Tripoli harbor. Marines, whose corps had been created in 1775, then burned the Philadelphia to prevent the Pasha's men from using it as a warship against the USA. The war went on until 1805, when the US won the Battle of Derne, reportedly the first recorded land battle of the United States on foreign soil. That battle, led by the US Marines, involved a 500 mile trek across the Libyan desert by an army of 500 Arab, Greek and Berber mercenaries. The first Barbary War ended, but a second Barbary War ensued following the War of 1812, when another pasha, this time Algerian, declared war on the US for failing to pay tribute. A multinational naval force defeated the Barbary pirates, and subsequently France took over Algeria and Tunisia. The Mediterranean had been freed from piracy and has remained free with rare exceptions such as the Achille Lauro hijacking.

Piracy on the high seas has recurred since the Barbary Wars, but not until recently on the scale of the Sirius Star hijacking, with the re-emergence of weak states and the custom of paying tribute. But what of the US Navy and the Marines? What role will they have in dealing with this recurrent serious threat to international commerce? After January 20, 2009, those decisions will rest with the advisors to the new US Commander-in-Chief, Barack H. Obama.