[And on that note: Merry Christmas!] 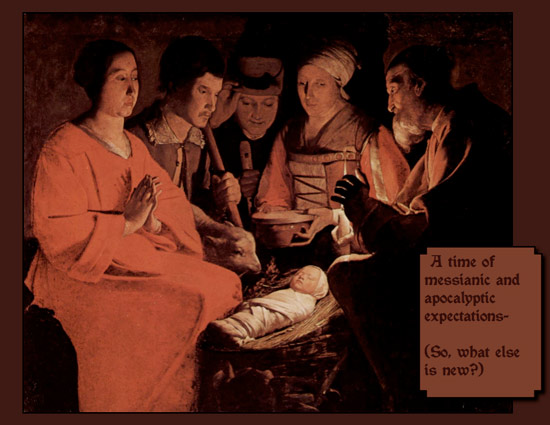 I've written before in the Coffeeblog about what it was like growing up as a Jewish boy, more or less, in a Christian country, more or less. As Christmas rolls around again (Hanukkah already started a few days ago), my thoughts turn to this theme once again. I began writing this on Christmas Eve, 2008. Although the terms are confusing, I want to write about Jews who consider themselves Christians, and about Christians who consider themselves Jewish. A good starting point is the life of one Jesus of Nazereth, born in the northern region of the land of Israel called Galilee, approximately 2,008 years ago (Wikipedia says the Jesus was probably born some time between 2 and 7 AD). It is in honor of the birth of Jesus that the holiday of Christmas is being celebrated today in Christian countries, but also in places like Japan. Even a self-designated atheist like the Jewish-born Ayn Rand enjoyed, supported, and celebrated Christmas.

Now it came to pass (does that sound Christmassy enough?) that my daughter gave me an iTunes gift card, with which I purchased an iPhone application called Wikipanion, enabling me to search Wikipedia on my iPhone, and as I am typing these very words, I am using it to search for "Historical Jesus," which I found after a few dropped WiFi connections.

What I read there was that the historical Jesus was a Galilean Jew living in a time of messianic and apocalyptic expectations. (As Jews like me say sarcastically, "So what else is new?") The Wikipedia goes on:

According to scholars such as Geza Vermes and E.P. Sanders, Jesus does not seem to have belonged to any particular party or movement; Jesus was eclectic (and perhaps unique) in combining elements of many of these different—and for most Jews, opposing—positions. Most critical scholars see Jesus as healing people and performing miracles in the prophetic tradition of the Galilee, while preaching God's desire for justice and righteousness in the prophetic tradition of Judea.

In my blogpost from last year about oil and regime change in the Middle East (Hanukkah, that is), I mentioned that the Jews had deposed Antiochus IV the Nut-Job and replaced him with their own Jewish royal dynasty, the Hasmonean Dynasty, which lasted until the Romans put their client king Herod on the throne 102 years later. The Jews of Judea, Samaria, and Galilee during the time Jesus lived and preached were probably not optimistic that another Jewish war would bring an to end Roman rule. At the time, there were Jews who were Hellenized (highly influenced by Greek culture) and spoke Greek, and those who were not, like Jesus himself, who spoke Aramaic, a language still spoken by a small number of old-timers in Syria, Iraq, and Iran. The Jews, as they are today, were also divided among various religious sects. Jesus was saying, among many other things, that divine intervention would be needed for the salvation of the Jews, which implied liberation from the Romans, who at the time worshiped many gods.

Nevertheless, four decades after the crucifixion of Jesus, the Jews did indeed begin the First Jewish-Roman War, which ended in the destruction by the Romans of Jerusalem and its temple. After a second war, the Romans renamed a new colony built on the ruins of Jerusalem as Aelia Capitolina. After a third war, the Romans renamed Judea, the historic homeland of the Jews, as "Palestine," a name which, as we all know, is not particularly popular among Israelis today. The mainstream media, to avoid enraging Muslims, tends to call Judea the "West Bank" (of the river Jordan) which is like, to a Texan, calling Texas the "North Bank" of the Rio Grande instead of Texas.

Jesus in his time had a following among the Jews of Judea and Galilee, as described in the New Testament, and it was these Jewish followers of Jesus whom I call "Christian Jews." Later, the apostles of Jesus brought his teachings to other peoples who were not Jewish, such as the Ephesians and Galatians (they lived in what is now Turkey.) Non-Jewish Christians soon outnumbered Christian Jews, especially after the Roman Emperor Constantine established Christianity as the Roman state religion.

I hope I have explained Christian Jews, but what do I mean by "Jewish Christians?" The existence of Christians, who consider Jesus to have been the Messiah (the Christ, in the language of the Hellenized Jews), but who consider themselves to be Jews, is a phenomenon of religious classification which tends to be ignored both by traditional Jews and traditional "mainstream" Christians. The most well-known of these is the group "Jews for Jesus" led by the Rev. David Brickner. Founded by a Jew, Martin "Moishe" Rosen, who became a Baptist minister, the organization began in 1973 according to its website. It now has a branch in Israel, and its stated mission is "to make the messiahship of Jesus an unavoidable issue to our Jewish people worldwide." Of course, that idea is quite threatening to traditional Jews, who have not forgotten the forced conversion of Jews in Spain during the Inquisition, and the expulsion from Spain in 1492 of those who did not convert.

Recently Rev. Brickner became politicized when he was invited to speak at Wasilla Bible Church, whose congregation includes Sarah Palin, 2oo8 vice presidential candidate and Governor of Alaska. Brickner's presence in Palin's church was played up in the mainstream media in an attempt to discredit Palin among traditional Jews, and among atheists of Jewish origin.

Another broad category of Jewish Christians is known as Messianic Jews , who are said to number 350,000 worldwide with at least 150 Messianic synagogues in the U.S. Considering themselves Jewish, they are considered to be Christians by traditional Jews. I would consider them to be both.

But what of your Coffeeblogger, whose mother was Jewish and who was raised partially in a Jewish tradition? Am I a Jew for Jesus, or a Messianic Jew? Neither. I am a plain old standard-issue secularized, assimilated American Jew. I consider the idea of a Messiah to be an important part of the beliefs of both traditional Jews and Christians, and some Muslims also believe in a messiah-like Mahdi who will liberate them from a world of unhappiness.

I have never believed, however, that Jesus of Nazareth was the Messiah, and for the record I do not believe that President-Elect Barack Obama is the Messiah either, as Nation of Islam minister Louis Farrakhan had claimed in a YouTube video, which was removed later by YouTube.

If those who believe that Jesus was the Christ also consider themselves to be Jewish, I am not horrified, offended, or threatened. I have seen no evidence that they are planning to kill me if I don't embrace Jesus as the Messiah. I am able to accept them as fellow Jews, although not like me. We Jews need all the help and support we can get.

And on that note: Merry Christmas! We Jews also need all the merriment we can get, and each and every offer is welcome.