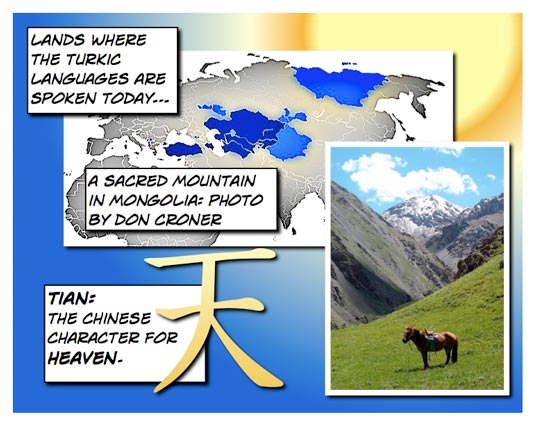 A few weeks ago I saw Sergei Bodrov's movie about the life of young Temujin, the Mongol slave boy who grew up to become Genghis Khan, conqueror of Eurasia from China to Afghanistan in the early 1200's. Wow. It was quite a movie, somewhat long and detailed compared to a Hollywood flick. Some of the scenes were so fantastic that I thought they were fictionalized, so I looked up Temujin in Wikipedia and found that the same events were believed to be true. One recurring scene beguiled me, when Temujin, at various ages beginning in boyhood, climbs a mountain to commune with a sky god named Tengri, personified in the film as a mysterious wolf. That scene led me to more web searching only to discover that Tengri is/was the universal deity of the Turkic and Mongol peoples, and as such, an excellent point of departure for a Coffeeblog extravaganza about Eurasia, Turks, Mongols, and sky gods in general. There is actually a religion called Tengriism, labeled pagan or shamanistic, but the worship of Tengri brought me back to memories of my school days. You see, I am so old that I remember that, along with the Pledge of Allegiance to the Flag, at the beginning of every school day we recited a prayer.

The prayer was an English language version of the prayer from the Christian New Testament called, in Latin, the paternoster. The relevant portions: "Our Father, which art in Heaven, Hallowed be Thy name… Thy will be done, on Earth as it is in Heaven…" There it was. In the USA of the 1950's, children worshiped a sky god. No, Tengri was never mentioned by my teachers. But there is another place where his name, or something very close comes up, especially timely as the 2008 Beijing Olympics are still going on as I write this. China.

In Mandarin Chinese, there is a word, Tian, meaning "heaven" with an older meaning of a god or a supreme deity. The Chinese character for Tian, depicted in the image accompanying this blog post, combines the characters for "great" and "one." News junkies of a certain age will recall that there is a huge square in Beijing called Tienanmen, named after a gate with the same name. The gate marked the entrance to the once-Forbidden City, a gated community reserved for the Emperor and his court. The first such emperor was Marco Polo's good buddy Kublai Khan, a Mongol emperor, who happened to be the grandson of the Tengri-worshiping Genghis Khan mentioned above.

Tienanmen, says Wikipedia, means the Gate of Heavenly Peace, which refers, not to any pacifist beating of swords into plowshares, but the Tianming, the Heavenly Mandate, which means the designation by Heaven who is fit to rule and who is not. Obedience to the Heavenly Mandate will bring peace, disobedience will bring violence. The emblem of the People's Republic of China features a depiction of the Gate over which hangs a large star (representing the Communist Party) over four smaller stars representing segments of society.

But China is only part of Eurasia, albeit the huge eastern part south of Russia and Mongolia. Remember, there is the Great Wall north of Beijing and along the northern border, built originally to keep out an ancient people called the Xiongnu. Wikipedia asserts that the Xiongnu, considered the ancestors of the same Huns led by Attila against the Roman Empire, spoke a Turkic language, and indeed, most of Eurasia is still inhabited by people who speak Turkic languages. These, of course, include the Turks who live in the Republic of Turkey today. The Wikipedia article on Tengri declares that modern Turks use "Tanri" (without the dot on the i) as a generic name for a god and sometimes a Turkish-language substitute for the Arabic name of God, Allah.

West of the Turkic-speaking areas of Eurasia are the lands whose languages came from Indo-Europeans tribes, including the language (English, a Germanic language) in which I am writing this blogpost. Indo-European languages include Russian, Persian, the languages of northern India, and the Romance languages derived from Latin. Another historically important language group, on the southwest boundary of Eurasia, is the Semitic, from which Arabic, Hebrew, and the ancient Mesopotamian languages are derived. The importance of these language groups is that their modern speakers often team up to form alliances and coalitions along the fracture lines where one such language group meets another. A very recent example is the clash between Indo-European-speaking Russians and Ossetians in opposition to the Georgians, whose language is not Turkic, nor Semitic, nor Indo-European, but unique to the Caucasus mountains. (Of course there are many other reasons for this conflict, but language group loyalties are worth mentioning. Russians, Georgians, and Ossetians all have a Christian past, so the conflict is not a religious one.)