Jonathan's Coffeeblog: Russia and the Caucasus

[More potently than chains or fortresses.] 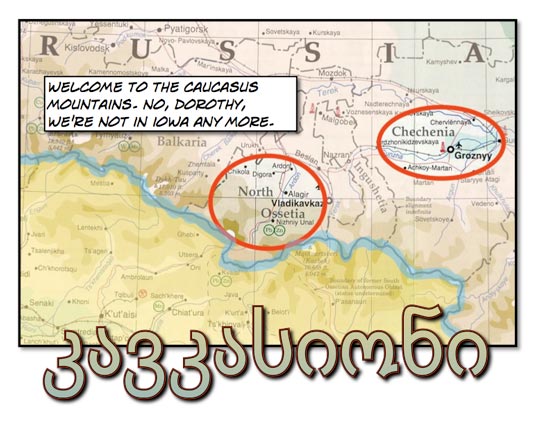 When I was in junior high school in 1957, I thought I knew all an American needed to know about Russia, and maybe I did, for that era of the Cold War. They had nukes, we had nukes. They could blow us up, and we could blow them up in retaliation if they tried it. We knew what Caucasians were too: white people. It was a polite way of saying it. Even today, if you ask an American what Caucasian means he will probably say it is a racial term. Mountain climbers might know about the Caucasus range, but even news junkies who know all about the Chechen wars with Russia probably don't think much about the mountains. Georgia, of course, is a southern state where Jimmy Carter once grew peanuts and they had the Summer Olympics in Atlanta, where a bombing took place. Well, bombing is still going on in Georgia: Not Jimmy's Georgia, the other Georgia, the independent nation on the southern slope of the Caucasus mountains. That Georgia, the Georgia which wants to join NATO, the Georgia who has the big oil pipeline. Oh yeah: the bombing. The Russians reportedly bombed Poti, the port from which the oil gets shipped to points west, like for instance the USA.

And so, in my cappuccino-fueled opinion, we Americans and other Westerners, and anybody who drives a car, ought to learn about the Caucasus mountains, and the countries around them. The number, variety, and mutual unintelligibily of the nationalities in that region makes the Balkans look, by comparison. as ethnically homogeneous as rural Kansas. But first, the mountains. I think an easy way to remember them is stretching between two seas, the Black Sea on the West and the Caspian Sea on the east. The Caucasus mountains don't go straight west to east but slant southward approaching Baku, a great oil-producing region. A particularly beautiful NASA map of the snowcapped Caucasus range can be found here.

The Caucasus range's highest peak is Mt. Elbrus, which rises to a height of 18,506 feet (5,642 meters) above sea level. The range is a natural barrier between Russia to the north, and Georgia, Armenia, and Azerbaijan to the south, and is considered a boundary between Europe and Asia. The scenic beauty and biodiversity could make the region a worldwide tourist paradise were it not for the ethnic, linguistic, and imperial hostilities which are not about to end soon.

The northern slope of the Caucasus range became part of the Russian Empire since 1816, when Aleksey P. Yermolov, an artillery general who had honed his skills in the War of 1812 against Napoleon, crushed the fierce resistance of the mountain peoples. In a letter to the Tsar, Yermolov reportedly wrote "I desire that the terror of my name shall guard our frontiers more potently than chains or fortresses." It took until 1864 for the Russians to subdue their Caucasian acquisitions.

Subsequently, many of the nationalities of the north slope of the Caucasus consider themselves protected by the Russians and became citizens of Russia. This includes the North Ossetians, descended from an ancient Iranian speaking tribe, the Alans. On the other side of the mountain range, their fellow Alanians, the South Ossetians, have been integrated into Georgia, independent from Russia since the Soviet breakup. The South Ossetians have complained of their treatment by Georgia to the Russians, who were quite happy to oblige by sending tanks into Georgia and bombing their oil port.

One opinion in the news today is that Russia's military intervention on behalf of the South Ossetian secession from Georgia was payback to US President George W. Bush by Russian Prime Minister Vladimir Putin, for backing the secession by Kosovo from Serbia. I wrote about that earlier in the Coffeeblog. Serbia has been an ally or Russia long before a Serbian national activist threw a bomb at an Austrian archduke and started World War One.

Another of the Northern Caucasus nationalities, the Chechens (whose land is also known as Ichkeria or Noxçiyn, and also has a major oil pipeline) is bitterly anti-Russian, and has been fighting the Russians since 1994. At least one American newsweekly has accused Islamic militants, including Saudi Wahhabis, of "hijacking" the Chechen resistance to the Russians, who for their part are accused of using tactics against the Chechens that might have been admired by General Yermolov.

One thing is sure: we are going to be reading about conflicts around the Caucasus region for a long time to come, or at least until our airlines are able to fly wind-powered or solar-powered aircraft and many old hatchets have been buried.