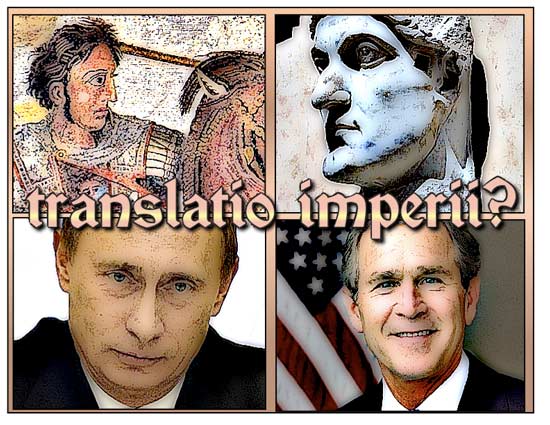 While putzing around the Internet I came across an obscure but interesting Wikipedia article which, I believe, has great relevance to the world of our time. The Wikipedia authors gave it the Latin title "Translatio Imperii," whose precise meaning is "transfer of command." A French historian of the Middle Ages, Jacques LeGoff, is credited with describing translatio imperii as a typically medieval idea. Undoubtedly some medieval political entities, such as the so-called Holy Roman Empire, founded by a German King named Otto, were based on that idea: as various empires have risen and fallen, the imperial names, ruling dynasties, geographic centers of power, and sometimes the official languages have changed, yet proceeded in a clearly traceable linear sequence. I am convinced that this is a useful and helpful theory of a process which applies far beyond the Middle ages and began long before, and makes it less difficult to make sense of the complex geopolitical events of our time, and of history. Here are two examples:

The Roman Empire: Romans described their empire as a "public thing," a res publica, from which our word republic was derived, as in today's constitutional republics, Islamic republics, and people's republics. The Roman term for military command, imperium, was the origin of the words empire and emperor. The late Roman Empire as described by historians split into eastern and western empires, of which the western was rapidly broken apart by Germanic peoples, eventually leading, in an attempted Germanic restoration, to Otto's Holy Roman version. The Eastern part, where Greek rather than Latin was the dominant language, became the Byzantine empire (more about that later). Later, during the Renaissance, Spain, Portugal, England, Germany, and Austria among others inherited part of the imperial power of what used the be the Latin-speaking western Roman Empire.

Following the conquest by Spain, Portugal, France, and England of the indigenous peoples of the Americas, a new power eventually arose, the USA, today often termed a "hyperpower", huger than a superpower; yet the US sphere of influence is not often called an empire. However, Lenin, in his book "Imperialism, the Highest Stage of Capitalism," added the USA to his list of imperialist, if not imperial, powers, and Lenin's description of the USA as an imperialist power has been repeated ad nauseam in the press worldwide.

Greece. Originally a pluralistic group of competing and occasionally warring city-states, most of Greece (with the exception of Sparta and a few other places) came under the leadership of Philip of Macedon by 336 BCE. His son Alexander the Great completely defeated the huge Achaemenid Persian Empire by 328 BCE. Following Alexander's death, the Greek empire he had created split into three parts: Egypt, Greece proper, and a huge Syria-based empire named after Alexander's general Seleucus, which basically replaced the Persian empire. Gradually the three Greek empires fell under the domination of Rome, from which the eastern portion, still Greek-speaking, became the Byzantine empire mentioned above following the founding of Constantinople by the Roman Emperor Constantine the Great in 330 CE, on the site of the ancient Greek town of Byzantium. The people of the Byzantine empire simply called it the Roman Empire, in Greek of course.

Meanwhile the Slavic-speaking migrants created their own empires, based on the Seleucid/Roman/Byzantine model, including a Bulgarian empire which no longer exists. The most important of these Slavic-speaking empires was Imperial Russia, commanded by a Caesar (Tsar), and retaining a Russian version of the Greek Orthodox religion.

Today, the single world superpower (hyperpower if you like, or if you don't like) is the USA, a constitutional republic, which, by the principles of translatio imperii might be viewed as the latest heir to the Western Roman Empire. Russia, which now calls itself a federation of independent states, might be viewed as the heir to the Greek imperial model. Greece itself is a now merely a smallish European nation with a rapidly increasing population of non-Greek immigrants, while Rome today is but the capital of Italy, another such nation with a growing population of non-Italian immigrants. (The ancient empires had many such immigrants too, some of whom, including Constantine himself, became emperors.)

There is much more to be told about the story of translatio imperii, however: specifically, Persia, China, the Arabian empire, and the Turkic empires. Pick up any newspaper any day of the week and you will read about certain Persian, Chinese, and Arab political figures who are openly planning to exert their power beyond the boundaries of their ethnic nations. For this reason I am planning a Part 2 and a Part 3 of this blogpost on translatio imperii.

As for Turkey and the Turkic republics of the former Soviet Union, I think of them as sleeping giants, especially Turkey, the name of whose capital, Constantinople, named after the Roman Emperor Constantine the Great, was not officially changed to Istanbul until 1930.