Milos Obilic and the First Battle of Kosovo 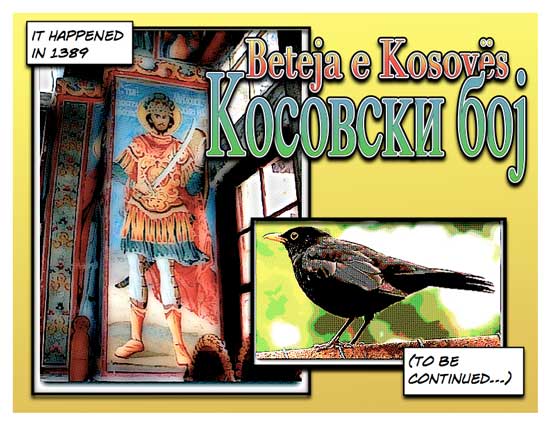 Later in life I'm becoming a history buff. In college I considered the study of history burdensome, with all those details to memorize for the exam, but now, whenever I hear a news headline about some world trouble spot, I want to go immediately to the Internet to get the background. This impulse has led to previous Coffeeblog posts such as The Right-Left Politics Meme, Anselm Kiefer's May-Beetle, and Ismail and the Safavids. Well, it's happened again. This past week or so, the new nation of Kosovo declared its independence, following which it was recognized by the US, following which there were huge demonstrations in Serbia against the US, plus riots by angry Serbs who set fire to a US Embassy office, a McDonalds restaurant, and multiple American Flags. "So what else is new?," you might be saying if you're a Christian, a Jew, or an atheist, who has not kept up-to-date on your Serbian history. "Of course the Muslims are burning the US Embassy. That's what Muslims do. The US must have been caught flushing another Koran or something." But guess what? The Serbs are not Muslims. They are Christians (Serbian Orthodox) or atheists too. So why are they angry? Well, the brand-new nation of Kosovo is populated primarily by ethnic Albanians (there is also an independent nation of Albania}, and most of the ethnic Albanians in Kosovo are Muslims. So the US supports a new Muslim nation and the Christians burn our flag? Well, yeah. For me, that means it's Google time again.

So what did I learn? Lots. I'll skip over the part where Putin and the Russians, who are traditional allies of the Serbs, are capitalizing on the huge anti-American sentiment in Serbia, and get to the history part. And that takes me to the story of Milos Obilic (pronounced mee-losh o-bee-litch: sorry, my software can't do the Serbian Cyrillic or diacritical marks). The Albanians call him Millosh Kopiliq. There is a stadium named after him in Belgrade. Obilic was a Serbian knight who died on or about June 15, 1389. How did he die? He was executed by the Ottoman Turks. Why? Because he assassinated the Turkish Sultan, Murad I, that's why. There is some dispute about how or why he was able to do this deed, but Turks and Serbs reportedly agree that he did so. There is a fresco of Milos Obilic on the wall of the Mt. Athos Greek Orthodox monastery which I used for the Coffeeblog illustration above. The Greek Orthodox, Russians, and Serbs seem to be very fond of Milos Obilic, but I would guess that there are probably no stadiums named after him in Turkey or Albania. So what was this assasination all about? And that takes us to the First Battle of the Blackbird Field.

The field, named for the blackbirds who apparently like to forage there, is located in an area called Gazimestan, about 5 km. from Pristina, the capital of the new nation of Kosovo. In Serbian, "kosovo" means "of the blackbird," hence the name of the field, the region, the new nation, and the battles. Yes, there have been multiple battles of Kosovo, and, frankly, I think we have not seen the last of them. The first battle, the one in which Milos Obilic died in 1389, was a battle between the Serbs with their Christian allies, and the Turks. The Serbs lost.

Now, generally, it is the winner of the battle who generally gets to write the history, but there are some exceptions. Remember the Alamo? That was a battle between Texans and the centralist government of Mexico, in which the Texans lost. They were all killed, but the Alamo is still there, and it is a kind of shrine to Texans, located in San Antonio, Texas. Another battle where the losers got to write the history was Thermopylae, in Greece, where the Greeks lost after being outnumbered by a huge Persian army. The Blackbird Field was such a place where the losers got to write the history, at least the history as taught in Serbia, and in Greek monasteries. The larger theme, of course, was the jihad by some Muslim rulers to spread Islam in Europe, and the crusades by some Christian rulers to resist the jihad.

The Ottoman Empire, in fact, ruled Kosovo for a time as the Vilayet of Kosovo, and later, Kosovo was integrated into Serbia, and then Yugoslavia. The land that is today Albania was controlled by the Ottoman Empire from 1385 until 1913, a lot of time for many Albanians to identify thoroughly as Muslims. In 1443, an Albania hero named Skanderbeg led a rebellion against the Ottomans under a flag which was derived from the Byzantine double-headed eagle of the Palaeologus family. That flag is still the national flag of Albania. The majority of Albanians are reportedly Sunni Muslims, but there is a long pre-Muslim history of Christianity and pre-Christianj religions, and during the 20th Century Communist regime of Enver Hoxha, atheism must have been the official religion. The proportion of Muslims in the new nation of Kosovo might even be higher than in Albania proper. Will they fall (or have they fallen) under the influence of Muslim preachers who denounce the USA as the Great Satan? We will find out, probably sooner than later.

As of six days ago, Israel announced they would not recognize Kosovo "for now." As of 11:58 AM today in Washington, where allegations of horrific Serbian massacres of Muslims in Kosovo have been taken very seriously since the Clinton Adminstration, it was announced by the US State Department that Kosovo will "never again" be part of Serbia. Never again? Please. In the Balkans or the Middle East, there is always a high risk that those words might have to be retracted.