[No American would consider eating a bald eagle.] 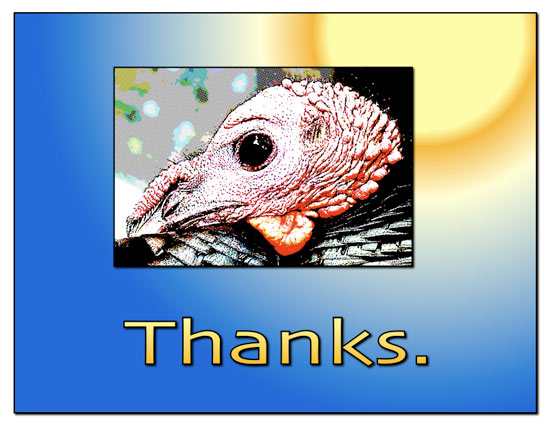 Today is the day that North Americans celebrate their good fortune, whatever it might be, and express their gratitude to whomever they feel it, divine entities optionally included. It is traditional to eat turkey on Thanksgiving day, probably a reminder that wild turkeys were abundant when the first European settlers arrived. At the very least turkey eaters can feel gratitude to the bird who gave its life, unwillingly as it were, for the festival dinner.

One aspect of Thanksgiving, here in California at least, is that the favorite ethnic foods of every family are incorporated into the meal. For my maternal grandmother, who officiated at Thanksgiving when I was a child, the feast included matzo ball soup, borrowed from the Jewish passover festival, and a stuffed turkey neck, which was called just that, although the Yiddish name is helzel, which has its own brief Wikipedia entry. It was stuffed with "polish stuffing," a mixture of flour and beef suet. Hey, don't knock it till you try it. Frankly, for me it was the best part of the Thanksgiving dinner, but I can't get it any more. Now I eat cornbread stuffing from a local supermarket, which is still the best part of the meal.

Interestingly, Benjamin Franklin wanted the wild turkey to be named as America's national bird in preference to the Bald Eagle. Franklin wrote:

For my own part I wish the Bald Eagle had not been chosen the Representative of our Country. He is a Bird of bad moral character. He does not get his Living honestly.… He is a rank Coward: The little King Bird not bigger than a Sparrow attacks him boldly and drives him out of the District. He is therefore by no means a proper Emblem… For the Truth the Turkey is in Comparison a much more respectable Bird, and withal a true original Native of America... He is besides, though a little vain & silly, a Bird of Courage, and would not hesitate to attack a Grenadier of the British Guards who should presume to invade his Farm Yard with a red Coat on.

In American folklore, however, the turkey is considered a stupid bird, and despised people are called turkeys. No American would consider eating a bald eagle, so perhaps the turkey's bad reputation is a way of dodging guilt about the mass slaughter and consumption of the birds.

In any case, if Benjamin Franklin was right about the nobility of the American wild turkey, everyone who consumes turkey today can reflect on the fact that, by the time the pumpkin pies and other desserts are served, he now has a little bit of the Bird of Courage inside him. And he's probably going to need it.