[Hail to the Chief?] 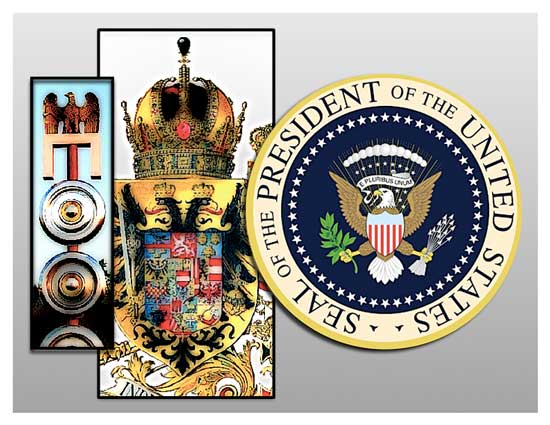 Eagles are a family of birds knows as raptors, from a Latin word for "robber." The words rob, bereft, rapid, and maybe even the slang term "rip-off" are all related. Eagles have very good eyesight, the better to spot their prey from far off, with sloping brows to protect the eyes from the sun. They also have strong heads and necks, and huge sharp, curving beaks. Romans who had noses like eagle-beaks (aquiline) were associated with nobility. Eagles have a no-nonsense look which has given them iconic status throughout history. The mythological Native American thunderbird was like an eagle, but large enough to create thunder when it flapped its wings. The European gods Zeus, Odin, and Jupiter also were said to have the power of thunder and lightning, and eagles were associated with these gods in stories and as symbols. In military terms, the eagle, King of Birds, could be said to have "air superiority," although I doubt an eagle needs to waste energy fighting other birds. I find this all fascinating. Even more than fascination, however, my primary motivation for blogging about eagles is the fact than an extraordinary event is taking place as I write this, an event whose outcome is unknown, which I will address in the last few paragraphs of this blogpost.

On the ground, the role of the most noble of the animals (the King of Beasts) was usually assigned to the lion. The ancient Persians and other peoples imagined a creature with a lion's body and cat ears, and the head and wings of an eagle, known as the griffin. Family crests, coats of arms of ruling dynasties, and the official symbols of nations are loaded with eagles, lions, and griffins. Lions, for example, are symbols of Britain, Venice, Iran, and Judah (the Jews.) But enough about lions: let's have a closer look at eagles.

Gaius Marius, an extraordinary politician of the Roman Republic (he served seven terms as Consul, the highest office), lived until 86 BCE. He reorganized the army, allowing commoners to become career soldiers, with the result of a permanent surge in the army's power and efficiency. There is a story that Marius as a youth found an eagle's nest with seven chicks in it, predicting his seven terms as Consul. In 102 BC, Marius declared the eagle to be the symbol of the Senate and People of Rome (Senatus Populusque Romae, abbreviated SPQR.) From that time forward, Roman Legions carried standards with an eagle (aquila) on top, an eagle that soldiers had to protect with their lives.

There are many places where two-headed eagles, often with elaborately spreading feathers, are the national symbol. One such place, mentioned in a previous Coffeeblog post is Albania, where the two-headed eagle on the Albanian flag is the symbol of their national hero Skanderbeg. Another such place was Österreich-Ungarn, also known as Osztrák—Magyar Monarchia, and in English as the Austro-Hungarian Empire, dismantled after its defeat in World War One. The double-headed eagle was the symbol of Austrian imperial might. Currently, the coats of Arms of Austria and the city of Vienna feature a single-headed eagle. However, curiously, a march called Under the Double Eagle (Unter dem Doppeladler) written by Josef Franz Wagner and admired by John Philip Sousa, the US March King, has becomel part of the US marching band repertoire. As for two-headed eagles, the English language Wikipedia has a good website on them, but don't miss the images in the German Wikipedia.

Two-headed eagles, by the way, have been symbols of non-Christian and non-European nations, including the Seljuk Turks, and one-headed eagles are associated with Arab countries including Egypt, and even the new post-Saddam Hussein Republic of Iraq. But the two-headed varieties are associated with the Roman Empire after it was divided into two parts, and especially with the Eastern Roman Empire whose capital was Constantinople. A two-headed eagle was on the crest of the Palaeologus family, the last ruling dynasty of that Empire, which is called Byzantine by Western scholars. Interestingly enough, a two headed eagle is currently one of the symbols of the Eastern Orthodox Church, whose main headquarters is still in Istanbul, the former Constantinople.

But what about the Bald Eagle, the national bird of the United States of America? Once an endangered species, it was removed from the official list of threatened and endangered species in 2007, after an effort by many Americans to protect the bird and its habitat. Is the Bald Eagle, like the Aquila and the Doppeladler a symbol of empire? Well, not officially. The USA is a constitutional republic, or as I recited daily as a schoolboy while pledging allegiance to the flag, "the Republic for which it stands, one nation, indivisible [later they added "under God"], with liberty and justice for all." However, like all great nations, the USA has its "spheres of influence." Perhaps it even has two hemispheres of influence. None of its rivals are empires either. China, no longer having an Emperor, is a people's republic. Iran, having inherited the Persian Empire of antiquity, is now merely a republic too, that is, an Islamic Republic, that is, a Shia Islamic Republic. And Russia, having shed its Czar and its Soviet ruling apparatus, is merely a federation. Russia's coat of arms, for what it's worth, features a double-headed eagle, while Iran has removed the lion from its flag and replaced it with the Arabic name "Allah," the central letter of which looks very much like a sword. China has no swords, eagles, and lions on its national emblem, but a sheaf of wheat, a gearwheel, five stars, and Tienanmen, the Gate of the Heavenly Mandate, under which the Emperors once ruled.

And that brings us to the event which is taking place as I write this. Votes are being counted in primary elections which are highly likely to influence the election of the President next November. It appears fairly certain that the next president will be one of three candidates, all of whom are extraordinary, and all three of whom are elected US Senators. One of these candidates, the wife of a former President, is a woman who has probably never worn a skirt during her adult life, and is very popular in the state of New York which elected her. Her charismatic husband is said to be even more popular outside the United States than within. Another of the candidates, a Senator for twenty years, is the son and grandson of former Admirals of the US Navy, and is a former pilot of attack aircraft. He reportedly survived four crashes of the planes he flew including one which led to his prolonged imprisonment and maltreatment in North Vietnam. The third candidate, perhaps the most extraordinary of them all, is the Christian son of an African Muslim, perhaps a distant cousin of a powerful Kenyan politician. His mother, now deceased, was a white American woman from the Kansas heartland. He is a master orator, extremely charismatic, and commanding a huge, loyal following.

After one if these candidates is elected and inaugurated, he or she will make all public appearances under the Presidential Seal, upon which is depicted an eagle, the Bald Eagle, with spread wings. In one of the eagle's talons is the olive branch of peace. In the other is a cluster of arrows. When the President appears, the band will play the official anthem, Hail to the Chief. Though most Americans probably have never heard them, there are words to this anthem, of which the final verse is:

Yours is the aim to make this grand country grander,
This you will do, that's our strong, firm belief.
Hail to the one we selected as commander,
Hail to the President! Hail to the Chief!