[Recited every day. It has never ended.] 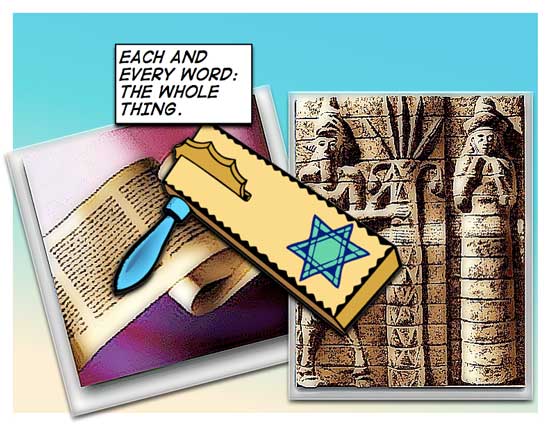 At sundown this evening it will be Purim again, the Jewish festival when Jews read from the biblical Book of Esther, traditionally recorded on a scroll of rolled-up parchment, papyrus, or paper. A Hebrew word for "scroll" is megillah, and the holiday has given rise to the Yiddish phrase, the "gantze (whole) Megillah." Since the rabbi reads the whole scroll aloud to the congregation in an ancient tongue, and seeming, for children at least, to go on forever, the "whole Megillah" refers to a prolonged, predictable litany which we have heard before, and are banefully expecting to hear over and over again. As it happens, "the whole Megillah" is a very timely topic today, and not just because it's Purim.

Let us begin with the Megillat Esther itself, the book that the rabbi reads aloud. It tells a tale from ancient Persia, where the king, called Achashverosh in Hebrew, is probably the very same Xerxes (Persian Khashayar Shah) featured as a villain in the recent film "300." In the Purim scroll, Esther is a Jewish woman, the niece of a Jewish official living in Persia, where many Jews have settled after a conquest by the Babyonian army. Achashverosh is not the villain of the tale, but there is a villain: Haman the Agagite. Haman, a subordinate of the Shah, wants to kill all the Jews. The threat is very real. It will very likely be carried out. Fortunately for the Jews, however, the beautiful Esther has become one of the Shah's favorite women, following an event where the Shah has been rebuffed and humiliated by the Queen. That development means that Esther has access to the Shah where she can, and does, plead the case for the Jews against Haman. After hearing from both sides, the Shah gives Esther's uncle permission to deal with the problem, which he does, backed by other Jewish men. Haman is executed on the very gallows he had built to hang Jews. End of Megillah. Or so it should be.

In Esther's Megillah the themes are ethnic and religious hatred, plots to carry out mass murder (what we now call "ethnic cleansing") or outright genocide, divine interventions on behalf of one party or another, close calls, political intrigues, and narrow escapes. Anyone reading current news about Israel, Iran, Hezbollah, Hamas, Olmert, Bush, and the "peace process," can hear the whole Megillah metaphorically recited every day. It has never ended, and Haman and threatened Jews are still in conflict.

But there's more. When the rabbi reads the Megillah, to children in the congregation have been instructed to listen very carefully for the name of the villain Haman. They have been issued toy noisemakers and told to drown out the sound of Haman's name so that it is never heard again. This is a very functional tradition. The children, who otherwise would be bored to tears listening to the whole Megillah can make a game out of paying attention. And so they try to blot out Haman's name from memory. Do they succeed? Quite the opposite. Paying attention to the name, and announcing it repeatedly with noise only ensures that Haman's name will never be forgotten. Khashayar (Xerxes, Achashverosh) was Shah of Iran from 485-468 BCE, and we still remember the name of Haman the Agagite 2493 years later. And because of that, we remember the whole Megillah. The rabbis who started this tradition knew what they were doing.

But there's more. This Haman the Agagite— who was he anyhow? There is no known ancient people called the Agagites, but there was a king name Agag who ruled over another ancient people named the Amalekites. They lived, not in Persia, but near ancient Judea. They were by reputation (and Biblical scripture) implacable enemies of the Jews. There is even a biblical passage (1 Samuel 15:1-35) where an angry God punishes the Jewish King Saul either for looting, or for being soft on Amalekites, according to one's interpretation:

Then Samuel [a prophet] said to Saul, “I was the one the Lord sent to anoint you as king over his people Israel. Now listen to what the Lord says. Here is what the Lord of hosts says: ‘I carefully observed how the Amalekites opposed Israel along the way when Israel came up from Egypt. So go now and strike down the Amalekites. Destroy everything that they have. Don’t spare them. Put them to death — man, woman, child, infant, ox, sheep, camel, and donkey alike.'"

So Saul assembled the army and mustered them at Telaim… But Saul and the people spared Agag and the best of the sheep and of the oxen and of the fattened calves and the lambs, and all that was good, and would not utterly destroy them…

[later] Saul said to Samuel, “I have sinned, for I have transgressed the commandment of the Lord and your words, because I feared the people and obeyed their voice. Now therefore, please pardon my sin and return with me that I may worship the Lord.

As for King Agag himself, Samuel the Prophet hacked him to pieces. But Haman, the so-called Agagite, lives on in the memories of those children who tried to blot out his name, including me, who is writing this blogpost, and once upon a time was a noisemaker-cranking kid in a synagogue. The whole Megillah. But there's more…

The Baal Shem Tov, the rabbi who founded the Hasidic movement, interpreted this Biblical passage as referring to, one might say in New Age jargon, one's "inner Amalikite." Not a member of an ancient tribe, but a spiritual enemy who resides inside us. According to the Baal Shem Tov, that Amalikite is atheism, which I call monotheism minus one.

Recently the presidential candidate Senator Barack Obama was criticized for not repudiating his personal and family pastor, the Rev. Jeremiah Wright, who had been recorded and videotaped railing from the pulpit, not against Amalekites, but against "rich white people" and the United States of America. Senator Obama gave a long, detailed superbly articulated speech in which he defended his long-term loyalty to Rev. Wright, although he personally disagrees with the pastor's anti-wealth, anti-white, anti-American rhetoric. From the political logic of the situation, it would seem that Senator Obama is hoping that the white and pro-American voters who go to the polls in November will have forgotten all about Reverend Wright.

But the Senator's speech covered much more ground than merely addressing the Reverend Wright kerfuffle, although he addressed it clearly and in my view, extensively if not exhaustively. The ground that Senator Obama covered in his speech, in detail, concretely, abstractly, and with great inspiration, was nothing less than the whole topic of Race in America.

In other words: the whole Megillah.