[But Ukraine is no Disneyland] 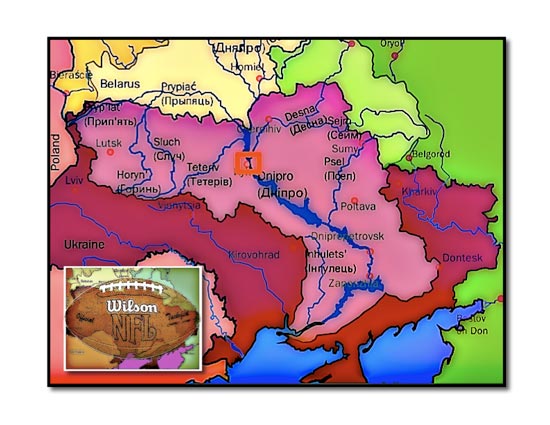 I must say that I have mixed feelings writing about Ukraine. It gives me butterflies in the stomach. More about that later, but I will start with a 2002 article by US ambassador to Ukraine, where he asserts that Ukraine is not "a political football between Russia and the United States." OK. Political, maybe not, but football? It seems to me that Ukraine's long history of being fought over by opposing "teams;" and of her inhabitants being kicked around for ages (as well as kicking each other around) justifies the football metaphor.

In fact, Ukraine is shaped roughly like the kind of football we play with in the USA, with the lush and huge Dnieper valley "breadbasket" in the middle, an east end bordering Russia, and a west end which used to be called Galicia, named after those very same Gauls who became the French and passed on the Gaelic language to the Scots and Irish. A Black Sea peninsula hanging off southern Ukraine was the site of the Crimean War, and is heating up again in the Russia vs. Georgia kerfuffle.

Ukraine's name is a Slavic description which means, "On the border," sort of like Disney's Frontierland, but, believe me, Ukraine is no Disneyland. For most of my life, Ukraine was called, in English, "the" Ukraine, but Ukrainians now insist that we drop the definite article "the." After all, we don't call Canada, "The Canada." (Interestingly, however, we do call the USA "the USA.")

Why, then should I write about Ukraine? For one thing, as I wrote in my Seltzer blogpost, my maternal grandmother's family emigrated from there, although the place they came from was part of the Austro-Hungarian Empire at the time. More importantly, however, is the fact that Ukraine, which has an oil pipeline as does Georgia, seems to be next on Vladimir Putin's hit list as a former chunk of the Russian Empire to be brought back under Kremlin control. Ukraine, though far from the North Atlantic, has applied for NATO membership.

Ukraine is populated primarily by two nationalities, Russians, and the majority, a people once called Ruthenians, said to be descended from the Kievan Rus'. That medieval empire eventually evolved into the Russian Empire itself, after a little kicking around by the Mongols. (There's that football again.) The capital of the Kievan Rus', Kiev, is now the capital of Ukraine (red square in the blogpost illustration.) There are Russophone Ukrainians and Ukrainophone Ukrainians, who speak a language called Ukrainian. There used to be a lot of Jews in the Ukraine, but that should be a subject of another Coffeeblog post. In the meantime, the movie "Everything is Illuminated" sheds much light on Ukraine, and not only her former Jews. As I said, Ukraine is no Disneyland.

Yes, there was mass murder of Jews in 20th century Ukraine, not to be shrugged off, but Ukrainophones speak of another mass atrocity called the Holodomor. There is a quote attributed to Joseph Stalin, "A single death is a tragedy, a million deaths is a statistic." Millions of land-owning and other Ukrainian peasants were killed as a consequence of Stalin's policies. No one on this planet should forget the Holodomor, which was justified on ideological grounds that the victims were "rich" peasants.

Having written pretty much what I wanted to write about Ukraine for this blogpost, I realize why it was that I put it off. Sadness. Just plain sadness. Sadness not only for those members of my seltzer-peddling Ukrainian family who foolishly stuck around until the Holocaust, sadness for the millions who starved in the Holodomor, and and, yes, sadness for the other minorities in Ukraine who face catastrophes yet unkown, and that includes the Russophones. Will Ukraine be invited to join NATO? Will other NATO members be willing to send their sons and daughters to fight and die to defend Ukraine should NATO decide it necessary? Will Ukraine be reabsorbed into a new Russian Empire, and if so, how will the Ukrainophones and other minorities be treated?

It's a lovely fall day in Berkeley. Cal is playing UCLA. Football. A perfect day for an exciting game. Fortunately, it's only a game.