[When the personal is universal and vice versa.] 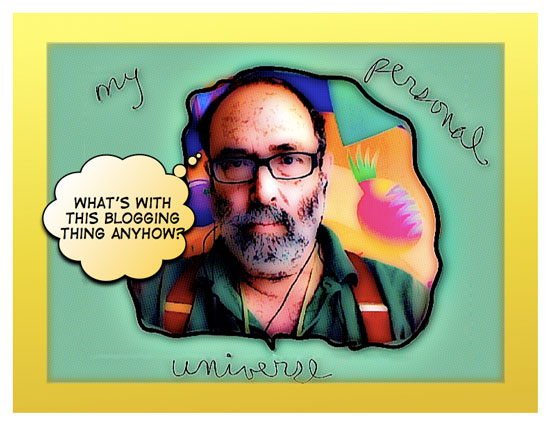 I've been more and more satisfied with what I've posted to the Coffeeblog over the past few months, and I'm getting more page views from visitors. How much these visitors read of what I've written, I don't know. But they're visiting, and some of them, according to my statistical software, stick around and read other things I've written after they read the stuff they were searching for. There is another trend, however, over the past few months: I've been posting to the Coffeeblog less often. What does that mean? Am I getting bored with blogging? (No.) Are my standards getting higher (Yes.), and therefore am I intimidating myself about writing more and posting new images? (Maybe.) I think I know what is happening. The Coffeeblog has transcended mere ego-tripping, hobbyism, and showing off, though it is all of the above. It has become nothing less than a repository for my sense of personal identity. In decades past, that role was filled by college, job, ideological identification, and to a lesser extent, lifestyle. Now, as a certified old geezer (I collect Social Security!) I have needed to rewrite the whole saga before my demise, which even if it should happen fifty years from today, will be untimely. (I guess my health is good enough for me to still think that way.) What all of this lengthy paragraph implies is that the Coffeeblog is very, very personal. But there's much more to it than that.

Certain of the topics which I have roughly categorized in the Coffeeblog seem to be growing in importance as time goes on. The "Gods and Myths" page seems now to be the most popular landing place for new viewers. I also have been writing increasingly often about historical stuff: stories and histories, which are ultimately the same thing. Conventional American discourse is now mostly focused on just how bad George W. Bush is (or if you still like Bush, there's always Hitler, Ahmadinejad, and Hillary Clinton.) But really folks, there was a world that existed long before any of those luminaries, and that world shaped the recent era in which the same luminaries have acted. That is why people like Ismail I, Shah of Iran, Constantine and his mother, and Hulagu Khan have become more important to me than, say Jack Murtha or Dick Cheney. However, I don't want the Coffeeblog to turn into a blogospheric remake of the History Channel. And that's where the personal stuff comes in. I recently coined the lame, geekspeak term "universonal" as a portmanteau of "universal" and "personal." Perhaps a more elegant word will soon surface, but I have concluded that a good blog has to be "universonal".

Recently Mark Bernstein gave a talk in Cork, Ireland, about blogging. Mark graduated from the same college I did, which I characterized, when I was still there, as a "boot camp for intellectuals." He went on to become a specialist in hypertext and the developer of the Tinderbox note processing software, with which I publish this weblog, and which I have discussed elsewhere on it. What does Mark have to say? He has developed a theme of Neo-Victorian Computing, an idea which would have never occurred to me. When I think of Victorians, I think of "we are not amused" (a quote from Her Majesty herself), of buffalo hunts on the Great Plains, of extravagant but spooky Queen Anne mansions, Charles Dickens, and the Sepoy Mutiny. Mark has brought to light a whole new, much more positive view of that era. If I might paraphrase a wall motto from the California History section of the Oakland (California) Museum, where a magnificent, posh display of Victoriana had greeted the visitor, "scoff now at the Victorians; there will be plenty of time for humility when they are gone." (That section, BTW, is closed for renovation, so even the motto is gone.) In a sense, Mark is saying the same thing. He has a lot to say, and I am reading and rereading his work as an ongoing process. One of his voluptuous lecture slides carries the slogan: built for people, built by people, crafted in workshops, irregular, [and] inspired. Considering Mark's Tinderbox software as a workshop (for writing) alchemized into computer software, and considering one person (myself) as "people," I believe that the Coffeeblog qualifies, in that sense, as neo-Victorian.

Mark has also coined a word, nobitic, from the Latin for "ours." He writes about nobitic blogging, that is blogging for an intimate, limited audience of friends and family. My first weblog was such a nobitic blog, for family members, and it is still online, but I do not give out the URL publicly. In that sense, the Coffeeblog is not truly nobitic. In another sense I consider the entire blogosphere, and indeed, anyone with Internet access, even if only by mobile phone in Kathmandu and Timbuktu, to be my personal, intimate audience. For that reason, I make an effort for each blogpost, not always successful, to tell a personal story regardless of whatever I am writing about. Though tempted to write stuff that might offend some of my readers (and I undoubtedly sometimes yield to that temptation without knowing it), I try to maintain a bond of civility within that universal "family." And, from the other end of the telescope, I try to consider the universality of the topic of the post I am writing. It's a tall order.

Finally, to quote from one of Mark's recent blogposts, "We can do things we have never done: what is worth doing? What is worth writing? Who are we, and what do we want?"