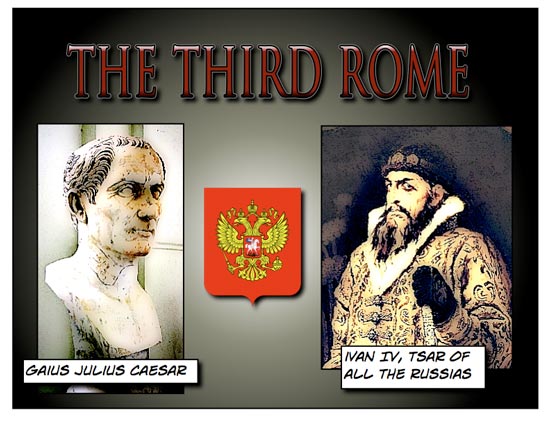 I recently wrote in the Coffeeblog about a medieval political theory called, in Latin, translatio imperii, meaning transfer of power, promoting the idea that the Germanic kingdoms of Northern Europe were direct descendants of the Western Roman Empire. At this moment I am extending that idea to Russian history, beginning with a mysterious monk from Pskov, his Legend of the White Cowl, and his compelling idea that Russia was the Third Rome. The First Rome, of course, was the western empire ruled from Rome itself, which according to legend was founded by brothers Romulus and Remus. The Second Rome was the name for the Byzantine Empire, ruled from Constantinople, and created by Constantine the Great. According to the Pskov monk, whose name was Philotheus (Filofey in Russian), Constantine had given a white cowl to the pope, who sent it to Philotheus, who passed it on to the Archbishop of Novogorod, which was an important medieval Russian city. The Archbishop died in 1352. In 1453, 101 years after the Archbishop's death, Constantinople, the Second Rome, was taken by Ottoman forces and has been ever since a major Muslim capital, now called Istanbul. Russia, having received the white cowl, became the successor to the Byzantine Empire according to Filofey's doctrine of the Third Rome. This doctrine is not a mere historical footnote, but an idea to be taken quite seriously during our present era.

The First Rome was ruled briefly by the hugely popular Julius Caesar, who was assassinated as a threat to the republic. After a civil war, Rome was ruled by the first of many emperors, Julius' adopted son renamed Augustus Caesar. When Constantine ruled his Greek-speaking eastern empire, a system of junior and senior emperors was set up, one called by the title Caesar, and the other Augustus. The former title was translated into Slavic languages as Tsar, and under that title an emperor ruled Bulgaria in the year 913 after defeating the Byzantine Caesar. The Russians did not bestow the title on one of their rulers until 1547, well after Filofey's death. The title of Tsar has passed meanwhile into the English language under the alternate spelling czar, and today in American political discourse it is not unusual to write about a "drug czar," an "energy czar," and so forth. However, the title Tsar, used by Russia rulers from 1547 until the last Tsar, Nicholas II, was executed on July 16, 1918, is a linguistic reminder of the direct line of imperial power from Julius Caesar to the Third Rome, at least in the hearts and minds of those who were impressed by Filofey's theory, and those in Russia who still are.

The first Russian ruler to call himself Tsar was a Moscow prince named John IV, the Intimidating, who turned Russia from a medieval principality to the great empire it has been until recently, and may become again soon in a few years or decades. John defeated the many Turkic chiefdoms (khanates) surrounding Russia and incorporated them into the empire. One such notable khanate was the Siberian, whose huge cold expanses have become a legendary part of Russian history. John IV the Intimidating was known in Russia as Ivan Chetverty Grozny, translated as Ivan the Terrible, and it is by that name he has been known worldwide ever since.

Today Russia is called the Russian Federation. Its president is Dmitri A. Medvedev, and its prime minister is Vladimir V. Putin. At this time in history Russia has no Tsar. However, one wonders if Russia will resume its historical role as the Third Rome, as it did under the old Tsars, and under Communist rule as the "revolutionary vanguard" Soviet Union? That is a question of great importance to the many nations surrounding the Russian Federation, including Estonia, Latvia, Lithuania, Poland, Ukraine, Georgia, Armenia, Azerbaijan, Turkmenistan, Kazakhstan, Uzbekistan, Tajikistan, and Kyrgyzstan, all of whom were once ruled by Tsars. It is also important to other nations surrounding Russia which were not ruled by Tsars, but who have historically come in conflict with the Third Rome, including Afghanistan, China, Mongolia, Japan, and the United States of America, one of which, Alaska, was purchased from Tsar Alexander II in 1867 for $7.2 million. At its closest point, Alaska is 2.4 kilometers from the Russian Federation, closer to it than Turkmenistan. Russia is America's next-door neighbor.