What's with the Russia Thing?

[The great elephant in the American living room] 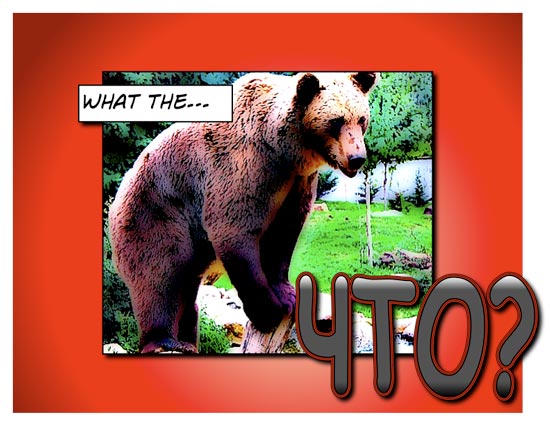 As I was thinking about the more recent posts to the Coffeeblog, I notice that I had begun to write more and more often about Russia-related themes. My last blogpost was explicitly about the Russian filmmaker Tarkovsky and his long film about a medieval Russian Orthodox icon painter. But the "Russia thing" has appeared in many other blogposts: Georgia, Ukraine, Putin, the Russian eagle, tsatskes and tsatski, etc. Pretending to be an avid Coffeeblog reader but not the Coffeeblogger himself, I asked myself, "What's with the Russia Thing?" Since I am the Coffeeblogger, however, I decided to try to answer the question, and then blog about it. So here we are.

I came up with a list of five answers. For one thing, I was told as a child that my paternal grandfather came from Russia and since then was fascinated by stories of the place. It turns out that he did not come from Russia, but from Poland, which at the time was part of the Russian Empire, but that's another story. In college, I studied Russian language and literature for two years, but did not become fluent or a literary maven.

And that brings us to the second item on my answer list: Russia is the great elephant in the American living room. The elephant metaphor comes from the folklore of alcoholic rehab. A family one or more of whose members are abusers of or dependent on alcohol has a tendency to avoid talking about that subject, as if they were entertaining guests in a living room containing an elephant, and pointedly refraining from discussing the elephant.

Yes, the newspapers have articles about Russia almost daily, but general mention of the country is on the back burner. Even China tends to get more attention, and of course the soon-to-be nuclear Iran, with the help of, yes, the Russians. It was very different in the 50's when I was a schoolboy, and the Soviet Union with its thermonuclear weapons loomed large as a threat.

And that leads to item three on my list, which is that the Coffeeblog, as it evolves seems to be more and more about the USA and its role in the world. A glance at the map on the right of this page (Visitor Locations) reveals that the Coffeeblog has readers all over the world, and I find myself, in my own small way, to be a kind of unofficial ambassador to those outside the USA, and an interpreter of the USA to those within US borders. My attitude about the USA is similar to what I said above about Russia. I am not trying to make the point that the USA is a problem. (There are literally millions of blogs that make that point.) I am making the point that the USA is the USA, it's there, and it's worth learning about.

Does that mean that I argue for the "moral equvalence" of the USA and Russia. No. Hell, no! I am basically a libertarian, if you haven't figured that out already, and Russia is not exactly libertarian country, whereas the USA has been since long before 1776. Russia, however, did produce one of the world's great libertarian writers, Ayn Rand.

And that takes us to my fourth point, which I articulated in this blogpost about the shift in my geographical thinking from the Atlantic Ocean to the Eurasian land mass. If that interests you, read it. And now for my final reason for writing about Russia:

I realized that I had become, as an old man, more or less, fascinated by geopolitics, so looked up that topic on Wikipedia. It turns out that my New Geography article had reinvented the wheel.

An American Navy admiral, Alfred Thayer Mahan, became a major geopolitical theorist based on his view of sea power, culminating in an 1890 book on that topic. Of course, Mahan would have been a very Atlantic-oriented guy, and the British and their Navy, since they defeated the Spanish Armada, were all about sea power.

But not all of the British. One of them, by the name of Halford Mackinder, a geographer, became the preeminent geopolitical theorist according to the current Wikipedia authors. What did Mackinder propose? A "heartland theory" of world power, centered where? You guessed it. Eurasia, and Russia in particular.

A final episode of that story: Adolf Hitler, in his quest for world domination, swallowed the Mackinder theory hook, line and sinker, and tried to implement it with his ill-fated invasion of Russia. The result: the Wehrmacht's defeat at Stalingrad, and eventually Russian occupation of the eastern part of Germany and East Berlin. Whoops. Mackinder may have had a point. but Adolf blew it.

So I've got lots more interesting reading and writing to do, and it'll be here in the Coffeeblog. Dosvidanya.